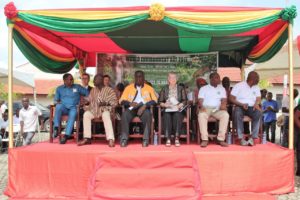 Ghana joined the rest of the world to commemorate this year’s world Environment Day on June 5, 2017 at Kyebi in the Eastern Region under the theme “Connecting People to Nature from Cape Three Points to Bawku”. The Kyebi event brought home the message of UN Secretary General, António Guterres: “Without a healthy environment we cannot end poverty or build prosperity”.  The event was hosted by the Okyenhene, Osagyefuo Amoatia Ofori-Panin, and co-organized with the Ministry of Environment, Science, Technology and Innovation (MESTI) and the Environmental Protection Agency (EPA). It brought together representatives from the Government, UN and other development partners including traditional and religious leaders, NGOs, the media as well as youth groups and students – the broad representation was symbolic of the collective effort needed to protect the country’s forests, land and water bodies. It was however not surprising that this year’s event was held at Kyebi, the district capital of the East Akyem Municipality, close to the Atewa Forest Reserve.

The forest landscape exemplifies many unsustainable activities and threats such as illegal mining (galamsey) and logging facing forest reserves and other important ecosystems in the country. Several speakers at the event ceased the opportunity to reiterate the saying; “When the last tree dies, the last man dies”, as a reminder of the fact that our survival as a human race is greatly dependent on a healthy and safe environment. A pre-event on Monday, 5th June saw the planting of over 1,000 tree seedlings on deforested lands within the forest landscape. 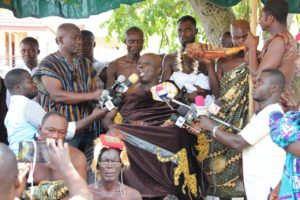 The Okyenhene, Osagyefuo Amoatia Ofori-Panin, in his address expressed concern at the level of environmental destruction and pollution of the country’s water resources and called for immediate sustainable efforts to check the negative trends. Expressing support for the protection of Atewa Forest Reserve, the Okyenhene said his outfit will continue to support all efforts to secure Atewa forest till eternity.

The event also had in attendance Madam Christine Evans-Klock, the UN Resident Coordinator for Ghana. She explained in her address that, the economic, environmental and social goals of the Sustainable Development Agenda 2030 are interconnected and indivisible. She used the menace of illegal mining as an example, saying: “Illegal informal mining threatens forest and water systems, locally and downstream. 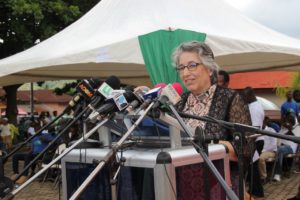 Through polluting water, public health is endangered. By avoiding legal processes, informal mining deprives Ghana of tax revenue that should be earned on her natural resources and invested in supporting development for everyone.” She called on Government to implement the international Minamata Convention on Mercury after its ratification by parliament this year to apply to all mining activities including small-scale mining.  She also called for capacity building and awareness of communities to eradicate completely, the use of mercury in mining activities. 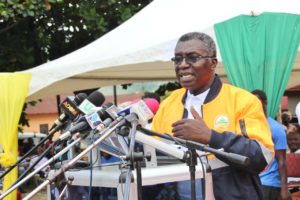 The Minister for Environment, Science, Technology and Innovation, Prof. Frimpong-Boateng said, Government has committed itself to address the urgent issue of illegal informal mining and appealed to the various stakeholders to join forces in addressing the challenge which has worsened drastically over the past decade.

As part of the WED program, musician ambassadors for the “Atewa National Park” campaign led by A Rocha Ghana and its partners, rallied support through the singing of their inspirational hit single “Atewa Till Eternity”. A drama group made up of students from Kibi Secondary Technical School translated the issues of galamsey into an inspirational theatrical performance. 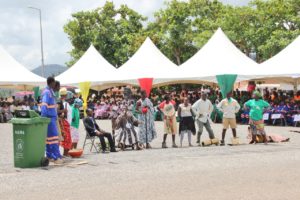