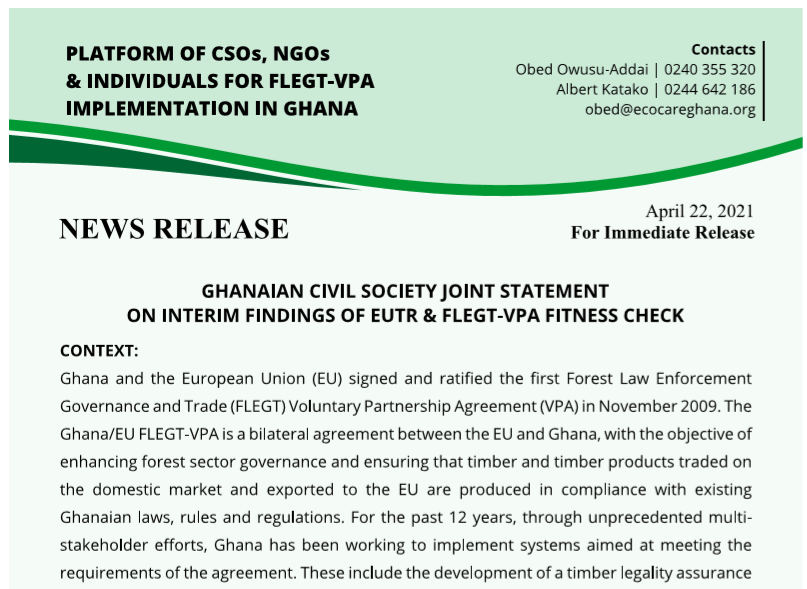 A Platform of Civil Society Organizations, Non-Governmental Organization and Individuals who have been involved in the FLEGT-VPA implementation in Ghana has released a joint statement in response to the findings of the EUTR &FLEGT-VPA Fitness Check conducted by the European Union through the Directorate-General for Environment (DG ENVI). In the statement, the group highlighted the procedural and technical flaws in the so-called fitness check and contested the motive behind such a unilateral undertaking by the EU. They raised concerns that the EU might be shooting itself in the foot if they continue to flip-flop on international agreements and might in the future lose credibility.

They observed that, since signing this FLEGT-VPA agreement significant steps have been taken by the government of Ghana to implement systems aimed at meeting its obligations to the agreement such as the establishment of a wood tracking and timber licensing scheme, enactment of new laws and policies for the governance and management of forestry sector and setting up a department in charge of ensuring compliance at the Forestry Commission of Ghana.

The group made up of about 31 CSOs and individuals were however displeased about the “interim findings of the fitness check and the public pronouncements made by the EU to the effect that they were considering alternative support mechanisms to enable partner countries to comply with EU requirements with the intention to revoke the FLEGT-VPAs”. They therefore called on the EU to see the broader picture of the significant transformational change that the process has brought to forest governance and management despite the delay in the issuance of the FLEGT License. They emphasized the need for the EU to rather invest in identifying bottlenecks that are impeding the process in the various VPA countries such as declining political commitments instead of reinventing the wheel.