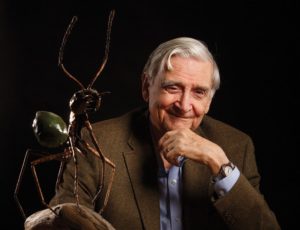 Edward O. Wilson, in full Edward Osborne Wilson, (born June 10, 1929, Birmingham, Alabama, U.S.), American biologist recognized as the world’s leading authority on ants. He was also the foremost proponent of sociobiology, the study of the genetic basis of the social behaviour of all animals, including humans.

Wilson received his early training in biology at the University of Alabama (B.S., 1949; M.S., 1950). After receiving a doctorate in biology at Harvard University in 1955, he was a member of Harvard’s biology and zoology faculties from 1956 to 1976. At Harvard he was later Frank B. Baird Professor of Science (1976–94), Mellon Professor of the Sciences (1990–93), and Pellegrino University Professor (1994–97; professor emeritus from 1997). In addition, Wilson served as curator in entomology at Harvard’s Museum of Comparative Zoology (1973–97). (Read more on Wilson at: https://www.britannica.com/biography/Edward-O-Wilson)

Letter to the President of Ghana to Save Atewa Forest

Re: Ghana’s responsibility to protect the globally important Atewa Forest

I am writing to draw your attention to global concerns for the future of the Atewa Forest in Ghana, prompted by news that the hills on which the forest is located are to be mined for bauxite.

As I am sure you are well aware, the Atewa Forest is of exceptional biological importance being the finest example of Upland Evergreen Forest in the Upper Guinean Forest region (from Ghana west to Sierra Leone). Only about 5% of the Upper Guinean forest now remains, so sites like Atewa Forest are of global importance. Atewa Forest is so exceptional that it is listed amongst 38 places around the world that I highlight in my book Half Earth: Our Planet’s Fight for Life as the most important places on earth that humanity should set aside for nature. It therefore worries me greatly that such a special site should be considered for mineral exploitation.

The reason for Atewa’s great biological importance lies in the high diversity of species and the high level of rarity of many species that are found in the forest. Atewa is home to many thousands of species of which over 100 are at either threatened or near-threatened with extinction according to the International Union for Conservation of Nature (IUCN). These include 11 mammal species, 13 birds, 12 amphibians, 1 reptile, 4 fish, 3 butterflies and no less than 59 species of plant. Three of these species are Critically Endangered with extinction, the highest level of threat that can be assigned by IUCN. The White-naped Mangabey Cercocebus lunulatus is a Critically Endangered primate whose global range is almost entirely within Ghana and which is already the subject of intensive conservation breeding programs at zoos in Ghana and around the world. It would be a great setback to global efforts to save this species from extinction if a site that currently protects this species is lost. The Togo Slippery Frog Conraua derooi which is also Critically Endangered is found only in Atewa Forest and in the Togo-Volta hills. The population in Atewa is about to be described by scientists as a new species distinct from the population in Togo-Volta hills. Two species of butterfly—Mylothis atewa and Anthene helpsi—are found in Atewa Forest and nowhere else in the world.

The relatively high altitude of Atewa Forest causes a distinctive type of vegetation to grow that is extremely rare in Ghana but very rich in species. Over 1,000 species of plants, 230 species of birds and at least 50 species of mammals have been recorded in Atewa Forest. The forest has over 570 species of butterflies recorded and another 138 are expected to occur which would make it the richest forest for butterflies in West Africa.

In recent months, careful work led by A Rocha with support from IUCN Netherlands, has demonstrated the forest’s enormous importance to the water supply of five million people in Accra. In their report to the government of Ghana The Economics of the Atewa Forest Range, Ghana (http://bit.ly/2mAKGgs), they provide a compelling economic case for protecting the forest which when combined with its biological importance makes a strong argument to designate Atewa Forest as a National Park.

The extraction of bauxite will undoubtedly require the forest to be removed since the deposits are only within the top few meters of the horizon and spread over a wide area. There is no low impact technology that can access these sorts of deposits without stripping away the surface. The resulting landscape will be impossible to restore to its former condition because the organic layer will be removed during the mining and it would probably take centuries for the lost flora and fauna to be re-established if they are not entirely extinct. I am also very concerned about the presence of an alumina processing plant in such a sensitive landscape. The highly caustic “red mud” that is a by-product of the Bayer refinement process is notoriously hard to store and lethal if it escapes. This poses a dreadful risk to the Atewa landscape and its critical water supplies.

The alternative vision for Atewa Forest to declare it a National Park would be a progressive, commendable and enduringly positive legacy for your Government in stark contrast to the loss that would be experienced should the hills be mined. Protecting Atewa Forest in this way would deliver on Ghana’s commitments to the Convention on Biological Diversity (CBD) and to the Sustainable Development Goals. In particular, I would like to remind you of CBD Aichi Biodiversity Target 12 to which Ghana, along with all other Parties to the CBD, is formally committed: By 2020 the extinction of known threatened species has been prevented and their conservation status, particularly of those most in decline, has been improved and sustained. Ghana, along will all member states of the United Nations, is also committed to Sustainable Development Goal 15, target 5, which states: Take urgent and significant action to reduce the degradation of natural habitats, halt the loss of biodiversity and, by 2020, protect and prevent the extinction of threatened species. I believe that mining of bauxite in Atewa Forest is inconsistent with Ghana’s existing international commitments.

On the other hand, establishing a new National Park is an option with great public support amongst the forest-edge communities who are so dependent on the forest. A new National Park at Atewa Forest can deliver sustainable jobs and livelihoods for many people and as part of a living landscape can provide new economic opportunities. Your Government’s decisive action to bring an end to the menace of galamsey has already demonstrated your commitment to the environment and has had a direct benefit for Atewa Forest. I urge you then to choose a sustainable and positive future for Atewa Forest and set it aside from mining plans. I believe that this is not only the right thing to do, but would also be a tremendous example to other countries that might be tempted to compromise on long-term biodiversity commitments to obtain short term economic benefits.