Rehabilitation of degraded portions of the Atewa Forest Reserve

Since the launch of the Atewa Critical Conservation Action Program in 2012, the drive for sustainable action by all stakeholders to work at protecting and managing the Atewa Forest Reserve has received some significant boost especially under the Living Water from the Mountain project which started in 2014. One of such actions is the commitment by fringe communities and other stakeholders to address the immediate threats facing the forest reserve particularly, mining and illegal logging which have been identified as high level threats to the ecological integrity of the forest ecosystem. 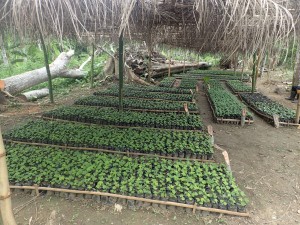 Key among intervention programs to salvage and possibly restore degraded areas within and outside the forest reserve is the replanting of indigenous timber species. The reforestation program would include areas affected by illegal mining activities (abandoned mine sites) and logging.

In collaboration with the Forestry Commission and traditional leaders, community nurseries have been established in three fringed communities (Dompim, Osafo and Tetekasom) to serve as seedling-bank for the replanting exercise.

Each nursery site is estimated to produce over 10, 000 seedlings which would be used for the entire restoration program. Involved in silviculture practices at the nursery establishments are farmers who were illegally farming within the forest reserve and have now agreed to assist in the rehabilitation process.