It has come to our notice that organizers of the second edition of the popular ‘Adom TV Fufuo Party’ which took place on March 6, 2019, supervised the ‘Illegal’ use of PANGOLINS, an endangered and globally protected species for some of the local delicacies featured at the event.

In a widely publicized video spotted by our team, two Pangolins, commonly known as ‘aprawa’— an endangered species, together with other animals had been stunned and displayed on a mat at the premises of the Multimedia Group—one of the largest independent commercial media and entertainment company in Ghana, during the event. One of the pangolins was clearly alive, while the other was dead, with blood all over its scales.

In as much as we love Adom Tv for their work on crucial social issues and the promotion of national culture, A Rocha Ghana condemns in no uncertain terms, the capture, and destruction of pangolins in the recently ‘Adom TV Fufuo Party’ held in Accra on Independence Day. The act which is widely published on Adom Tv Instagram page, and viewed by over 12,000 fans is in breach of the Wildlife Preservation Act 43 and its regulations in Wildlife Conservation Regulation L.I 685 and its Amendments. We therefore call for an investigation into activities that led to the display of a dead and a live pangolin, an endangered and wholly protected species in Ghana, at the ‘Adom TV Fufuo Party’.

A Rocha Ghana finds it hard to believe that a well-respected media entity like Adom TV oversaw such illegality and particularly coming just three weeks, after the 16th of February, which was World Pangolin Day, where the hashtag #Stoppangolintrade was in the trends for two days running and the day carried by several media outlets.

The feature and publicity of Adom TV which encouraged and endorsed the capture and destruction of pangolins is most unfortunate and erodes efforts in the last five years to minimize and eliminate the trade in pangolins.

A Rocha reiterates the fact that, the hunting, trade and destruction of pangolins is illegal and persons found culpable must be allowed to face the full rigorous of the law. A Rocha Ghana is firmly and resolutely committed to all necessary measures that will ensure Pangolins do not go into extinction. We are equally resolved to fight the menace of poaching and trading of the endangered species.

We call on all well-meaning individuals and organizations to join the fight in ending pangolin trade in Ghana. Let’s work together to reduce consumer demand for these products through awareness campaigns. You can help by spreading the word on social media and always saying no to pangolin products. 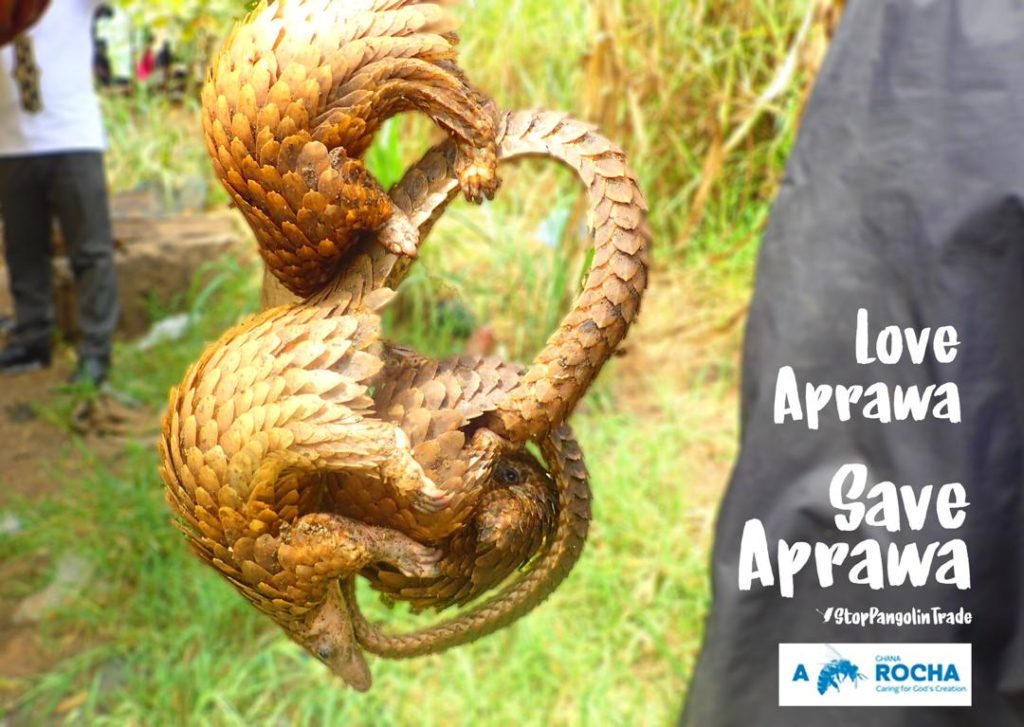 Recent studies has found that about 400,000 pangolins are traded every year in Africa, with the trade increasing and no solution in site making it crucial for targeted awareness and dedicated law enforcement and compliance actions to secure this amazing creature.

According to the Wildlife Division of the Forestry Commission, the population of Pangolins in Ghana is not known. However, the species is wholly protected by national laws. There is an international protection for the species through the Convention on International Trade in Endangered Species (CITES, Appendix I) and thus, cannot be exported or hunted even for its meat which is a delicacy in Ghana. Our delicacy for bushmeat which is not bad itself is however driving our biodiversity to extinction leaving a lot of our forests empty of any wildlife. This is the time to change attitudes when they are against the laws of the state and threatens the co-existence of man and wildlife crucial for the development infrastructure of our nation.