Wowed By A Pangolin

Pangolins—the World’s most trafficked mammals are gradually receiving some attention and even school boys and girls are standing up for them.

To raise awareness about the species and to further educate the younger generation about the legalities surrounding this endangered animal, A Rocha Ghana on March 15, 2019 came up with an innovative pangolin themed competition —featuring 10 different local Junior high schools in the Eastern part of the country. 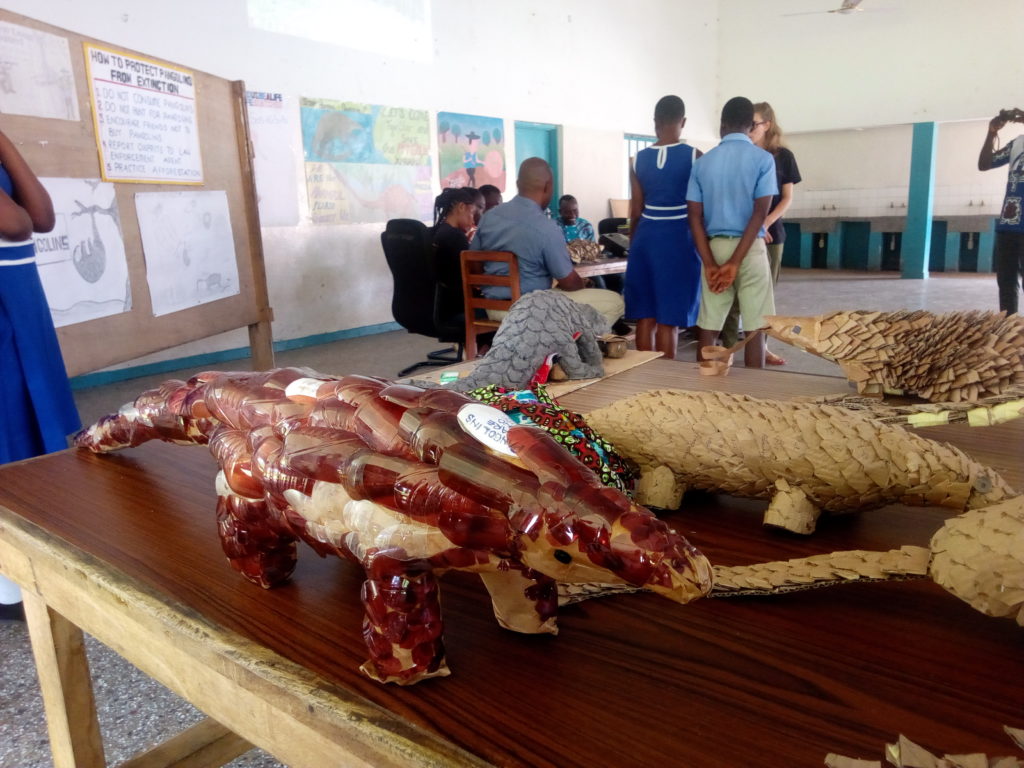 This exciting development held at the Asiakwa SOS JHS saw each school create an effigy of a pangolin using recycled materials like cardboard, plastic bottles and the likes.  The competitors were also tasked to design a billboard that promotes the conservation of pangolins within the Atewa forest while highlighting the issues surrounding the animal.

Prior to the competition, A Rocha took time to school students on pangolins and how the defenceless animal is often poached for bush meat. The students were made to understand that pangolins are endangered and the world’s most trafficked animals. Knowledge of how badly the number of pangolins in the Atewa ranges was reducing was not hidden from the students. A Rocha tutors further encouraged the students to refrain from eating pangolins and other bush meat and to educate their communities on the importance of protecting pangolins.

On the day of the competition, four students from each school were chosen to represent their school while two teachers accompanied them. Each school had their model pangolin and their billboard ready, and the competition began in earnest as the each began to lay eyes on the others’ creations! 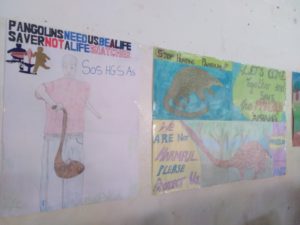 They displayed their works and had it reviewed by esteemed judges who were teachers from the participating schools.

The students described how they made their pangolin and told judges what the models represents. Most pangolins were made from cardboard save one made from cloth, another make from papier-mâché, one created out of clay and the last made from red bottles.

The creativity exhibited by these young students was one that left both participants and observers jaw-dropped. But the inspiration behind the priceless works of art was more than the competitive spirits of the students; it was inspired by the sense of joining the fight against pangolin trade.

Some model pangolins had messages on their scales with inscriptions like; “Save Pangolins”, “Stop Hunting Animals” and “Atewa Forever”. Each school was eager to interpret the messages their pangolin carried. Most of them reiterated that “pangolins need protection” adding that it was important to make sure pangolins do not go extinct. 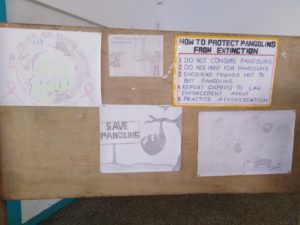 The billboards were just as impressive as the effigies. It was obvious that the competitors had not forgotten all that the A Rocha team had taught them about Pangolins. The billboards highlighted key issues about the Pangolin with different splashes of colour and beauty all around it. They used catchy phrases like “Be A Life Saver, Not A Life Snatcher” and “Eat Pangolins―Be Eaten By Ants”. The children presenting the billboards explained aspects of it, like what the picture was portraying and how each student contributed to the overall design.

The judges—ten teachers—scored each pangolin and billboard using a few criteria, and then totalled it up. The scores were very close, with just one point between first and second for the model pangolins. 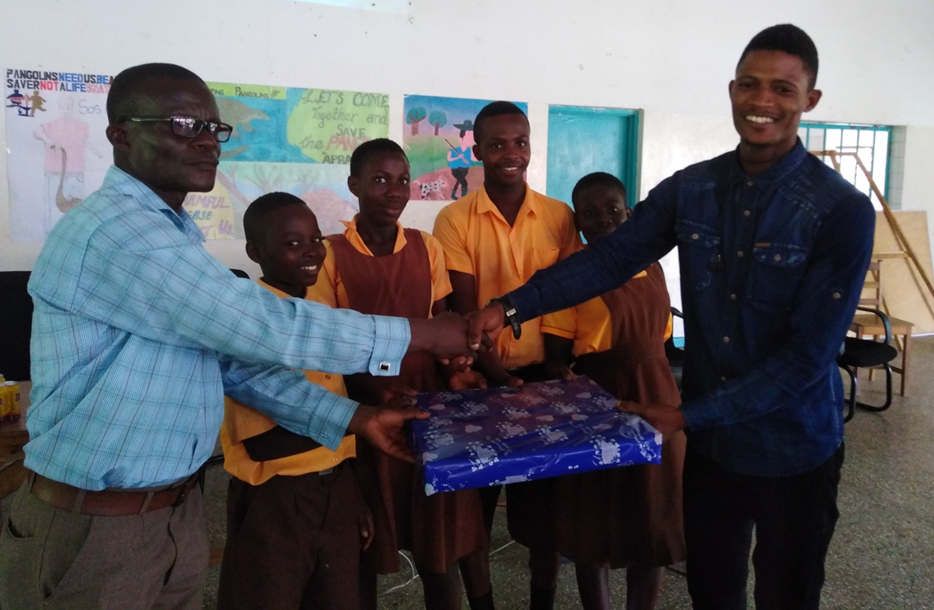 Larbikrom JSH however emerged overall winner after creating a model pangolin out of red bottles. They also designed the biggest and brightest billboard―one deserving to win. Their prize was a beautiful clock to be displayed in their school. In clock was embossed with a statement which indicated they were the winner of the pangolin competition.

We at Rocha Ghana are excited that we are making headway in the fight against pangolin trade. Inspired by the works of these young ones we, remain resolute to this rewarding campaign. We believe that initiatives like this are a very positive way to help students remember the importance of protecting pangolins. We are confident this will cause ripples in communities―reducing the number of pangolins hunted.

You can also support pangolin conservation in Ghana. Connect with us and let us work together to care for creation. 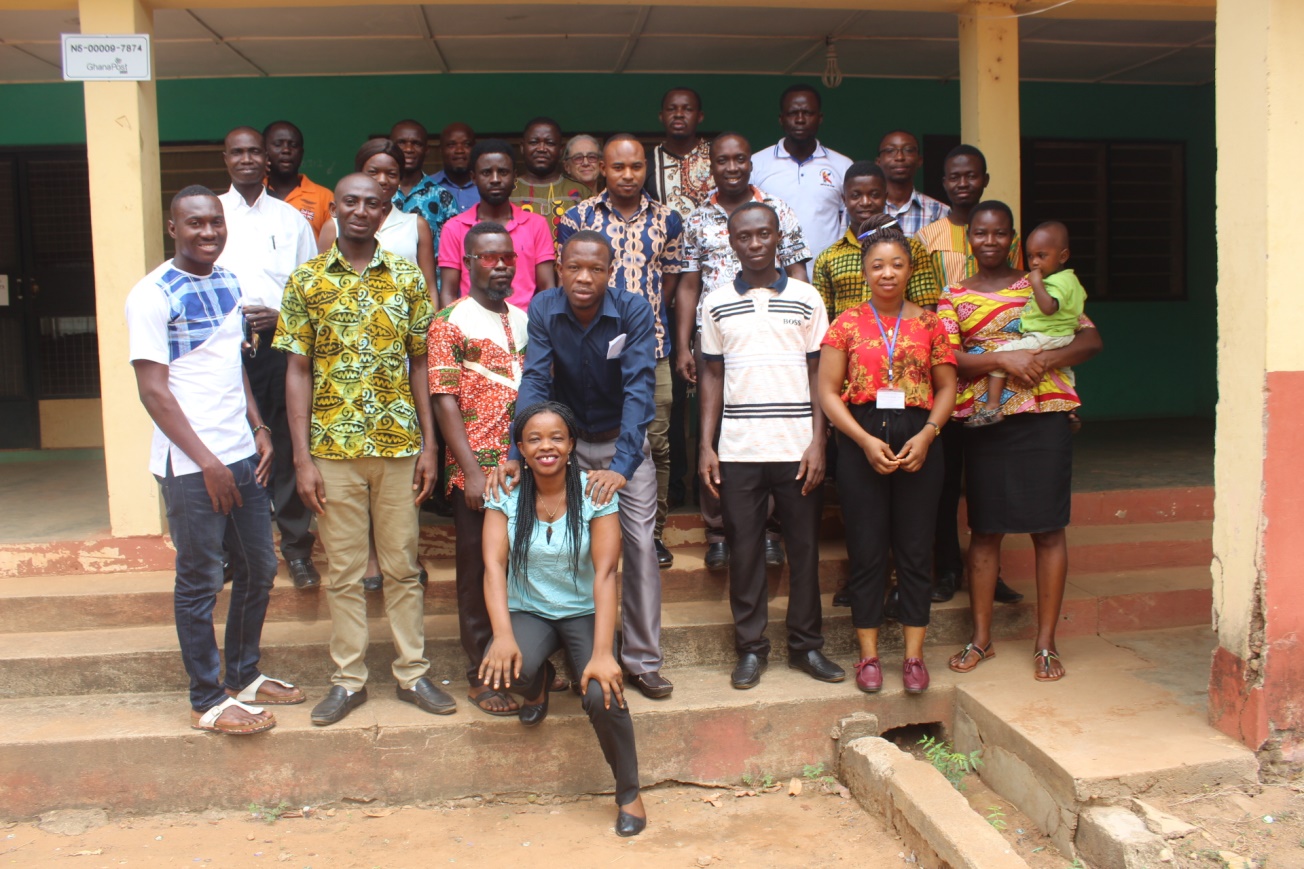 View all posts by Grace Sogbey (5)